DESERT HIGH – Between Earth And Sky 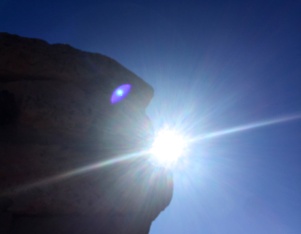 “I’d rather be here, with you, than anywhere else in the world.”
When the man in the mountain spoke, it wasn’t with words. A wave of warm air rippled across his furrowed forehead, crept over his craggy face, and burst from the mouth of a cave carved above his clean-shaven chin. The breath of wind beckoned. “Come,” it coaxed. “Let us walk together in another’s footsteps.”

The distance from the edge of the mesa to the bottom of the rock face might just as well have been the height of the Empire State Building. I thought we’d be maneuvering the 200 foot drop along some wide, gradually sloping, hand-railed staircase, not snaking down a perpendicular footpath where I’d have to stab my fingers into hand cracks to stay balanced and, in particularly narrow spaces, pry my dusty size six sneakers from smooth grooves worn into the pitted volcanic tuff by legions of industrious feet for nearly six hundred years.

We did have the option of driving back down to the Puye Cliff Dwellings Welcome Center in the van that had delivered us to the top of the dry mesa once we’d toured the site and had a glimpse into how the Tewa people lived centuries ago,

except, well, as you must know by now, that really wasn’t an option. We three mavens aren’t known for being faint of heart. Or rather, I should say, at least two of us aren’t. I’m usually the one along for the ride. The last one to jump off the bridge, or cliff, as in this case. But once I swallowed hard, screamed banzai in my head, and stepped over the edge, my curiosity for exploring the spectacular two-storied ruin of caves and cliff dwellings kicked in. With each step, our guide, Mr. E. (Emmett? Elliot? Charming man – can’t remember his name or where I noted it. I apologize E.) 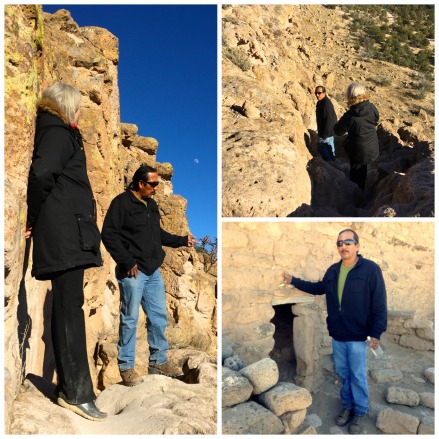 took us closer to the small window in time 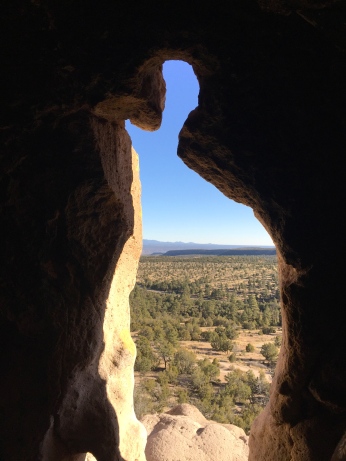 where his ancestors, today’s Santa Clara people, thrived for centuries

I tried to imagine carrying anything larger than a pea while scrambling up and down the rugged rock face on a hot summer’s day without slipping and plummeting to my death, especially when it came time to descend to the lower level

Whew – if that didn’t help me overcome my fear of heights, I don’t know what would.
Although – maybe this helped.

Now, a short film to tease your sense of adventure and fill in the cultural and historical details I failed to supply ~ Enjoy! ~ And thank you for stopping by today ❤

I am an adventure seeking ponderer of the mysteries of the universe, writer of children's books (represented by Stephen Fraser of the Jennifer DeChiara Literary Agency), and lover of anything involving armor, archery, or swashbuckling.
View all posts by Donna Gwinnell Lambo-Weidner →
This entry was posted in ADVENTURES, HOLIDAYS, ROAD TRIP, TRAVEL/PHOTO Themes and tagged adventure, D.G.Lambo, Donna Gwinnell Lambo-Weidner, dp_/photo-challenges/rather/, high desert, New Mexico, Puye Cliff Dwellings, Santa Fe. Bookmark the permalink.

16 Responses to DESERT HIGH – Between Earth And Sky