HE KNOWS WHEN YOU’VE BEEN NAUTICAL OR NICE

Sure enough—he was the real deal. And who did he think he was fooling with those shades? Certainly, not me. Incognito on a wind still summer’s afternoon—that’s what he was—a living, breathing, incognito San Francisco treat.

But a cable car operator? As good a disguise as any, I suppose. They do come into contact with all sorts of people—naughty ones, nice ones…

The cigarette hanging from the side of his white whiskered lips might have thrown others off, but not me. It wasn’t even lit—a sure sign of someone who had quit smoking because he wanted to set a good example, yet still enjoyed the ‘cool’ feeling his habit had afforded him in his youth. He had probably been much slimmer then too, before all those cookies and mugs of hot cocoa had had a chance to settle around his waist.

One year later, to the day, I saw him again.

He should have used permanent dye to color his beard. Then I might not have noticed him as we prepared to leave port. But then, if he had really not wanted to be recognized, he should have shaved it off all together. His new shades were definitely an improvement when it came to remaining anonymous though. The black, opaque lenses obscured the existence of any eyes, let alone a pair of glistening blue ones.

Staring at him, I pretended I was looking at the ancient aircraft-carrier size islands of ice and blinding-white mountains of packed frozen snow floating in the bay above his knit cap.

Had his hat been any color other than red, I might have been swayed from my conviction.

The mild breeze smelled of the morning’s catch stacked behind our small boatful of adventurers.

Ahhhhh—Yes, of course! We are just north of the Arctic Circle—he must be heading home. 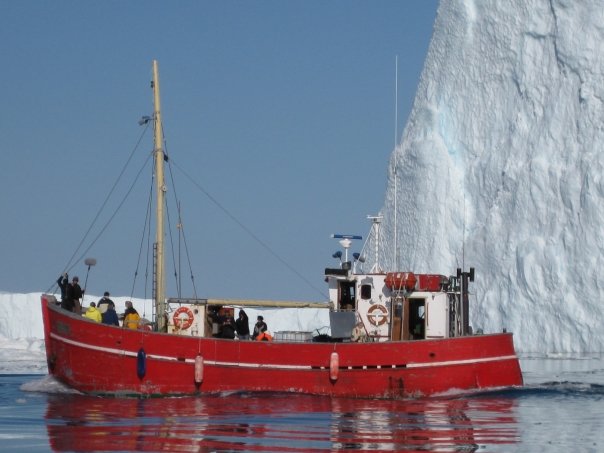 There were, after all, only one-hundred-and-thirty-three days left until Christmas.

This weeks blog post seems rather inane in light of the tragedy that took place in Boston just two days ago, but sometimes we need to be distracted from the inconceivable curve balls life throws at us. Here’s wishing you a lifetime of safe home runs.

I am an adventure seeking ponderer of the mysteries of the universe, writer of children's books (represented by Stephen Fraser of the Jennifer DeChiara Literary Agency), and lover of anything involving armor, archery, or swashbuckling.
View all posts by Donna Gwinnell Lambo-Weidner →
This entry was posted in ADVENTURES, HOLIDAYS, HUMOR, TRAVEL/PHOTO Themes and tagged Arctic Circle, author, blog, Christmas, Donna Weidner, Greenland, humor, San Francisco, Santa Claus, writer. Bookmark the permalink.