KALAALLIT NUNAAT – The Sun Sets on a Different World 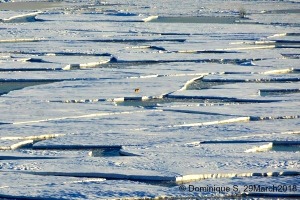 Quimmer. Stranded. Separated from his pack. About as visible as a grain of sand stuck to the smooth side of a seashell, the dog stands on a slab of sea ice floating atop the placid waves of  Scorsbysund. Four days ago, everyone in the east Greenlandic village of Ittoqqortoormiit woke up to a different world than what they had been used to at this time of year.

Mother Nature’s April Fool’s Day prank? Hmmm…I think not. Already in January and February, the months when sea ice should be expanding toward its seasonal maximum, Scorsbysund was becoming increasingly unstable. It was unheard of – until this year.
And it makes me sad.

In April 2016, exactly two years ago, one childhood dream of mine came true – the Arctic seed planted in my heart by a book I read when I was six years old grew into an adventure of a lifetime.

On a frosty, grey day a group of us set out on dog sleds,

our first stop on a four-day-three-night excursion: Kap Swainson

a beloved weekend get-a-way spot for local Greenlanders who, just six weeks ago,
in February 2018, were unable to make the trip because the sea ice was unsafe. 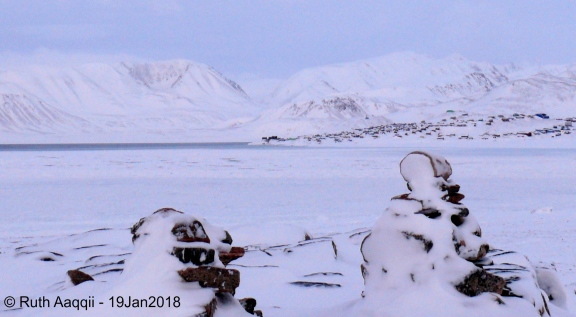 Two years ago, on the frozen fjord,
we were guided to the edge of the ice in hopes of spotting a seal or two
in their natural habitat.

At the same time, hunters settled their dogs in as sentries for the night 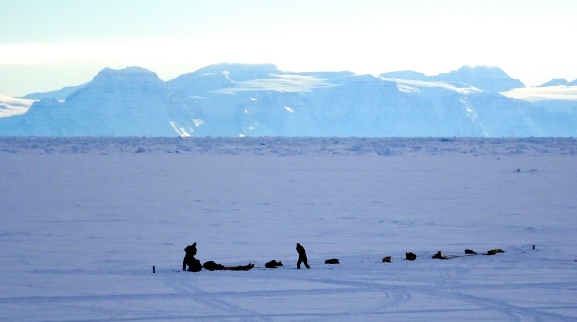 and watch their children play ball before bedtime… 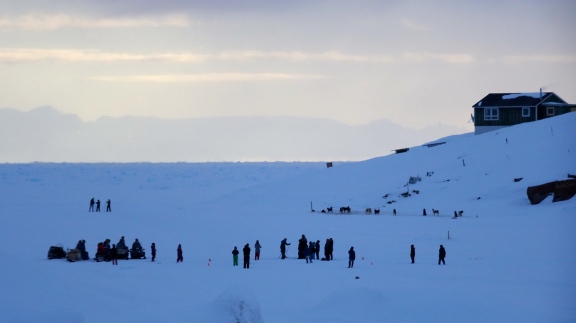 Two years ago, after days crossing the frozen sound on sleds,

I knew that one day the landscape would change – the ice would melt and never freeze again, at least not as it has in the past. The polar bear would adapt or become extinct. I knew that life would be different. I just thought we’d have more time. I’m not worried about Nature. Nature is resilient. But, are we?
Is this the sunset of life as we know it?

I would not presume to make predictions,
but from the looks of it a few days ago in Ittoqqortoormiit, 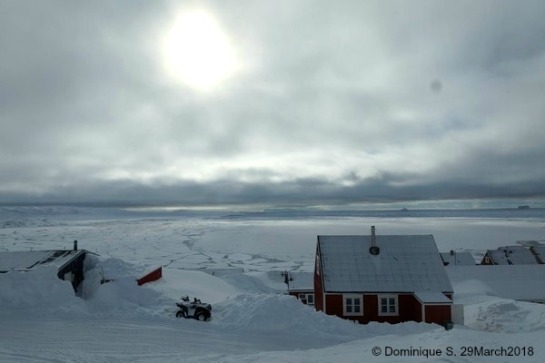 I am certain the sun will rise on a different world tomorrow. **

A huge thank you to Dominique S. for sharing her experience (and photos) in Ittoqqortoormiit. For a real-time experience, at least until May, check out her blog EXPERIENCE i-NUIT – an immersion in the heart of the polar night in an isolated village in east Greenland. If your French is on par with mine, the translate option works well. MERCI Dominique!

Also, many thanks to Ruth Aaqqii (You are my lifeline to the village, Ruth)! I suggest everyone visits GREENLAND OUTSIDE. Phenomenal updates and Photos!

Now, you think I’d be finished writing about my Arctic adventure by now, but let me tell you, this experience made a huge impression. It is constantly on my mind, even though it’s been two years since my visit. Ah well, please bear with me…

❤ Qujanaq ❤
And thank YOU for stopping by today.

I am an adventure seeking ponderer of the mysteries of the universe, writer of children's books (represented by Stephen Fraser of the Jennifer DeChiara Literary Agency), and lover of anything involving armor, archery, or swashbuckling.
View all posts by Donna Gwinnell Lambo-Weidner →
This entry was posted in ADVENTURES, ARCTIC WONDER, ROAD TRIP, TRAVEL/PHOTO Themes, VIEW FROM MY SOAP BOX and tagged adventure, adventures in Greenland, climate change, D.G.Lambo, dog sledding Greenland, Donna Gwinnell Lambo-Weidner, dp_/photo-challenges/rise-set, Ittoqqortoormiit, Scorsby Sund. Bookmark the permalink.