NOT FA NUTTIN’ – BUT BROOKLYN ROCKS

I’m finally on my way to the Southampton Writer’s Conference. Since this event is back East, I decided to stop and visit family and friends along the way. First stop, Brooklyn.

Until the Verrazano Narrows Bridge was completed in 1964, the only way to get to Brooklyn for a Staten Islander like me was to take the ferry and then continue on by car, bus, or train.

Even after the bridge had been built, Brooklyn was never a destination for my family other than to occasionally head out to Sheepshead Bay for Sunday dinner when my parents didn’t feel like driving down to the Jersey shore for fresh fish.

Brooklyn was the borough we drove through to get to the airport to pick up my grandparents. It often conjured horrible memories of pain and suffering from the time I burned my elbows on the Coney Island giant slide during a second grade field trip. When someone tells you to cross your arms over your chest before shoving you off a wooden cliff on a worn potato sack I suggest you take their advice. Arms are not meant to be brakes, but they sure will burn like them at high speeds.

Nope. Brooklyn had always been off my radar until one of my son’s ended up living here a few years ago. If I stick my head out his 22nd floor window and look north, besides getting dizzy and nauseas, I can admire the view:

In order to stay safe though, my daughter (and traveling companion) cried from our deflated blow-up bed,

“Get your head back inside woman before you fall out!”
“Only if you get up so we can get our butts in gear and do some walkin’ around,” I hollered.

We started with the awesome new sights from the East River promenade: 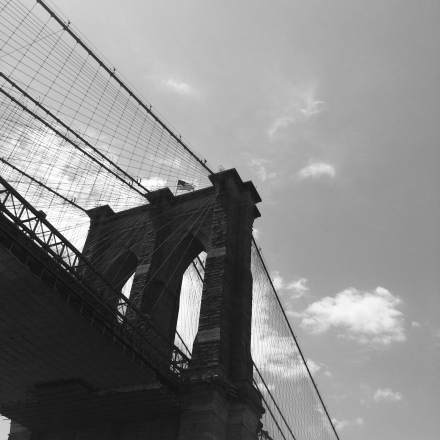 On our way there, we came across a most adorable couple:

Until our last stop at the Brooklyn Museum  – even though it was too late to squeeze in the Ai WeiWei exhibit, we managed to hit a few highlights before they  closed. 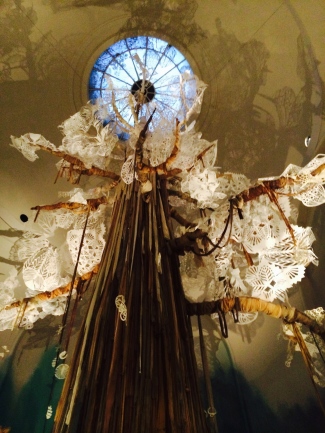 Although stunning, Elyse is not part of the installation

Kiki Smith’s ANNUNCIATION I’m not touching it – even though I want to.

Tired and happy,  we headed back from whence we came as the gargoyles in the museum’s subway station bid us farewell

I hope you’ve enjoyed this tiny, rather rushed taste of Brooklyn.
If you’re ever in the area, do check it out.
Just promise me you’ll stay clear of the manhole covers.

14 Responses to NOT FA NUTTIN’ – BUT BROOKLYN ROCKS