Sir Francis Bacon once said, “Opportunity makes a thief.” Indeed, it does. For what do you think happens when you leave a box full of donuts untended in a room with two Labrador Retrievers?

If you’re thinking the obvious answer is a couple of bloated (w)itches with a ‘B’  or  puddled boat loads of barf on the living room rug well, no, not this time. Although, having read some of our pooches’ previous antics, I can understand why you’d think that.

No, this time, Jazzie had Madison, our visiting friends’ puppy, as an accomplice to the dastardly deed we’ve come to dub – The Dunkin’ Donut Incident – a magical  tale of canine high-jinks involving the aforementioned box of sweets erroneously left sitting on the bar height kitchen counter when our families joined together for an afternoon of fun-in-the-sun adventure and forging memories that would make us laugh for decades.

In classic retriever pose – nose twitching and directed toward the countertop, 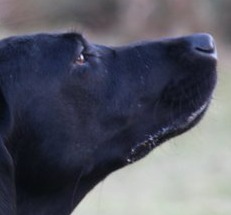 one paw bent and lifted, tail straight, level with the floor – Jazzie howls, “Finally!
The smell’s been driving me insane.”

Madison sprints to the kitchen, her toenails clicking on the cool, tiled floor. “I still can’t believe they left them out in the open.”

“That’s thanks to you, you know – faking you had the runs – a little distraction goes a long way. If they didn’t leave when they did they’d’ve been late. My humans hate to be late.”

“Yyyy-up. The circling around the island must’ve done it – except, I was really casing out the counter – trying to find a way to drop that donut box when no one was looking.”

“That, my dear Madison, might not have boded well for us.” Jazzie huffs. “But we have other fish to fry right now.”

“No. We have another problem. I can’t reach that high. It’s the curse of the British breed of Lab – short and stocky.”

“Rrrrruff break, but maybe it’s just as well.” Madison hangs her head. “Both our vets said we need to lose a few pounds.”

“That’s easy for them to say. They don’t live next door to Cheerio packin’ babes like we do.”

“I know. I’ll fall over and play dead for anything – except maybe lettuce.”

“Me too, unless, of course, there’s blue-cheese dressing involved.”

Brrrrrruuuuuummmmmmm
The air-conditioner kicks on.
A cool blast stirs the air.

*Sniff – Sniff*
“There it is again!”
Jazzie pants.

“Time to  grab the donuts!” Aiming for the counter, Madison bounces up on her hind legs. “Nooooooo!” Her paws slip off the ledge.

Madison snorts. She barks. She leaps ———– She stumbles, falling short of her mark.

“Smell that chocolate! Sniff that jelly! I want SPRINKLES in my belly! ” Jazzie chants.

Madison rallies. She backs up to the wall. Scrambling until her feet gain traction – she’s off, running at breakneck speed – she leaps – aaaaand

“Rrrrright, that’ll teach Alex for not playing with us today!” 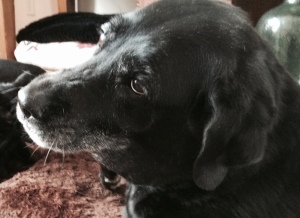 Thanks for the memories – for the fun, the laughter, and the tears.
See you again on the Rainbow Bridge
With a bag-o-dunkins’ in hand.

I am an adventure seeking ponderer of the mysteries of the universe, writer of children's books (represented by Stephen Fraser of the Jennifer DeChiara Literary Agency), and lover of anything involving armor, archery, or swashbuckling.
View all posts by Donna Gwinnell Lambo-Weidner →
This entry was posted in ADVENTURES, FAMILY, HOLIDAYS and tagged adventure, author, blog, Dog Day Afternoon, Donna Weidner, family, Holidays, Loss of a Pet, Rainbow Bridge, Sir Francis Bacon sayings. Bookmark the permalink.

22 Responses to A PETTY THIEVES’ TALE