THE CASE OF THE MISSING DUMP

Warning: this blog entry may be in some ways extremely graphic with regard to the digestive system of the canis domesticus. This advisory does not apply to anyone between the ages of eight and twelve.

As I headed out for a walk with the girls this afternoon, I finally remembered to take an extra dookie bag along to pick up what Lucy had dropped off a few days ago just moments after I had run out of bags.  Since moving to California, I have become quite the model dog walking citizen. I am much more diligent about picking up our pooches’ do-do than I had been in Germany where, deep in the Bavarian Hansel-and-Gretelesque forests, gale force winds, torrential downpours, and blustering snowstorms had a way of breaking feces down in a matter of seconds. 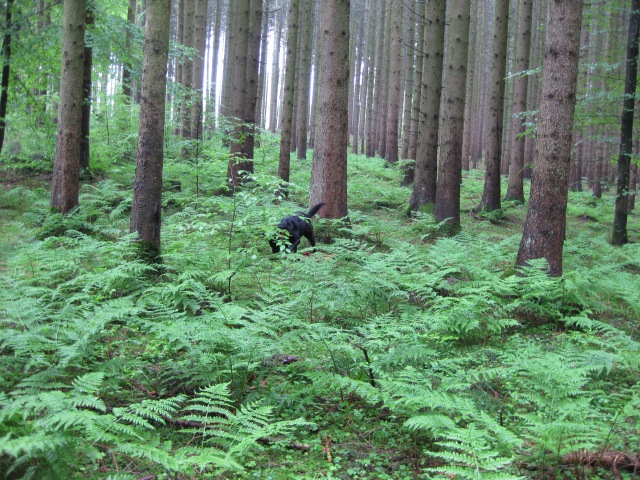 Not to mention that no     defecating fox, deer, or rabbit ever complained to me about an occasional extra turd or two on their turf. And – if they had, I would have crabbed right back at them, because nine times out of nine-point-zero-zero-zero-one Jazzie would sniff out the most moist, noxious, stench filled animal droppings she could find and take a roll in it. I know. YUK! But that’s what Lab’s do…

– not the best photo, but you get the idea –

Well, now our walk takes us to the total opposite end of the spectrum – from the lush, green, often wet Bavarian landscape, complete with colossal cow-pie splatter…

to a dry, brown, dusty mountaintop, also with DI-NA-MITE views – 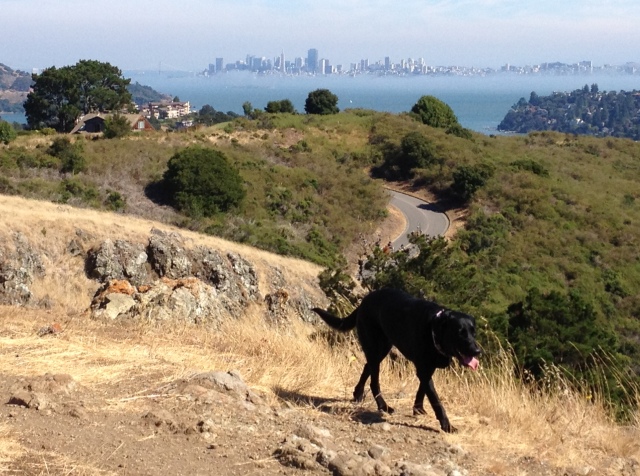 Now this hilltop also proposes to be the local puppy-port-o-potty, which is precisely why I feel obligated to abide by the You-poop-it-You-scoop-it law. If people weren’t diligent in picking up their poochies plops – well, I’d hate to picture it…

I knew where it was. I was certain. I had made a mental note as to its exact co-ordinates – down the path, left at the rock outcropping, third…or was it the fourth forget-me-not patch of flowers…but alas, the pile was nowhere to be found. The more I think about it though, I should have taken a picture of the spot or noted the longitude and latitude on my phone’s notebook app since lately, mental notes have had a way of escaping down the shower drain. Hmmm… The Case Of The Missing Mental Note…but I digress.

I am an adventure seeking ponderer of the mysteries of the universe, writer of children's books (represented by Stephen Fraser of the Jennifer DeChiara Literary Agency), and lover of anything involving armor, archery, or swashbuckling.
View all posts by Donna Gwinnell Lambo-Weidner →
This entry was posted in ADVENTURES, HUMOR, LUCY and JAZZIE and tagged adventure, author, blog, dog-walking, dogs, Donna Weidner, hazardous waste, hazmat, pets, poop, pooper-scooper, writer. Bookmark the permalink.

16 Responses to THE CASE OF THE MISSING DUMP