A WEE TASTE OF SCOTLAND

Posted on May 23, 2013 by Donna Gwinnell Lambo-Weidner

So, there’s a Scottish joke that goes something like this:

Angus had just returned from a holiday in Spain. When his friend Hamish asked him how it was, Angus answered, “Ahhhh, it was a bit too hectic for my taste.”

“The Spaniards are too stressed – mañana, mañana – it’s enough to make your head spin.”

Yes – time has a way of slowing down in Scotland. You can feel it in the air. You can see it on the roads, especially in Orkney: 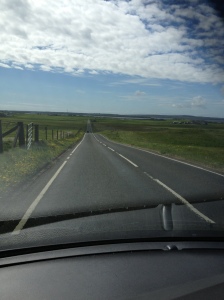 Having little or no internet service for 21 days forced me to slow down and literally read the writing on the  screen. Imagine trying to sign into your laptop and its response is always time out.

If that’s not a direct order to chill out from the powers that be, well then I don’t know what is.

This was not the hotel we were expecting…

Nor was the Ring of Brodgar 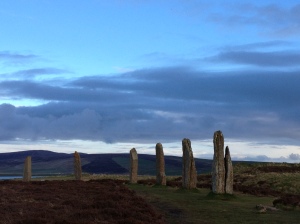 Fortunately, the real deal was just the other side 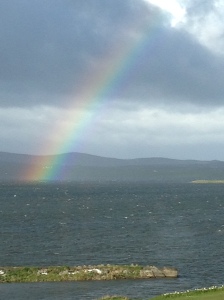 of the rainbow and a little left of

But first, I had to do battle

with an escaped wild animal 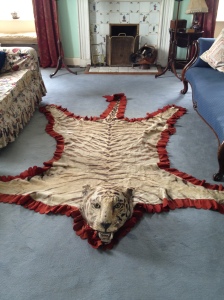 (Bet you didn’t know I was this good with a sword, did you?)

Before a detour took us into and out of 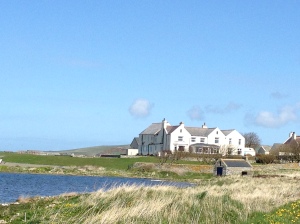 We had truly arrived.

The room however, was a bit prehistoric – too dark and much too cold.

The Broch of Gurness

So, we asked for another.

Ahhhh, and that was much better!

And there you have it – a taste of Scotland – to be continued sometime soon.

I am an adventure seeking ponderer of the mysteries of the universe, writer of children's books (represented by Stephen Fraser of the Jennifer DeChiara Literary Agency), and lover of anything involving armor, archery, or swashbuckling.
View all posts by Donna Gwinnell Lambo-Weidner →
This entry was posted in ADVENTURES, HUMOR, TRAVEL/PHOTO Themes and tagged adventure, author, blog, Donna Weidner, Orkney, Ring of Brodgar, Scotland, travel. Bookmark the permalink.

16 Responses to A WEE TASTE OF SCOTLAND