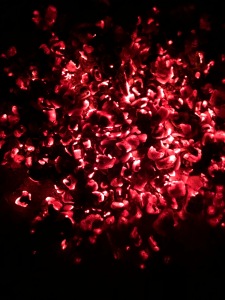 She just couldn’t figure out what that something was. Had it risen from the cooling embers when she turned and reached for her fleece?

Besides the chill that launched goosebumps up her back, spread them across her neck, and down her arms, a wave of fine hairs saluted the intruder from places she never thought were populated by even the finest follicles evolution had ever inspired.

Dark, swirling fingers curled around her waist. Looks like smoke, she thought.

It spiralled up, up, upward toward her chin. Smells like smoke.

But smoke does not stop short, about-face, and backtrack to your heart.

Her gaping eyes ducked for cover beneath tightly cinched brows as that something squeezed hard enough to clench her teeth and long enough to spark a blackout.

The writing prompt suggested an eight line poem, but I got a little side tracked. I invite you to do the same, not necessarily get side-tracked, but to write to the prompt and share your 8-8-8 in the comments or in a link to your site.

My 8th line is from a middle grade novel, Skulduggery Pleasant Book 1 by Derek Landry
“She’s twelve. He’s dead. But together they’re going to save the world. Hopefully.”
Ahhhh…to be twelve again! I’m sure I would have loved this series.
(Greg Pattridge! This may be one for Always in the Middle  [middle grade book reviews])

Looking forward to enjoying your creation. ❤ Be Well Dear Reader ❤

I am an adventure seeking ponderer of the mysteries of the universe, writer of children's books (represented by Stephen Fraser of the Jennifer DeChiara Literary Agency), and lover of anything involving armor, archery, or swashbuckling.
View all posts by Donna Gwinnell Lambo-Weidner →
This entry was posted in ADVENTURES, WRITING CHALLENGES and tagged adventure, Always in the Middle, D.G.Lambo, Donna Gwinnell Lambo-Weidner, Donna Lambo-Weidner, Greg Pattridge, Middle Grade book reviews, Skulduggery Pleasant by Derek Landry, writing prompt. Bookmark the permalink.

Life is an adventure - from camping in the Arctic to hunting for errant single socks to navigating the world of writing.