Posted on May 7, 2020 by Donna Gwinnell Lambo-Weidner

“Won’t you step into my spaceship,” said the spider to the fly. “Tis the speediest little spacecraft in which you’ll ever fly. It will take us to great heights, ones you’ve never reached before. Just soar up here to where I’m hanging, beside the cockpit door.”

“Oh, no thank you,” said the fly. “Though your invite sounds quite grand. I’m happy here upon the earth, buzzing o’er the land.”

“Are you certain?” said the spider. “We’ll be back in the blink of your eyes.
They say the moon is a sight to behold
at least once before we die.”

“Indeed, you’ve a point.” The fly patted her gut. “But, I worry about the provisions.
Only enough food for the humans and us will fuel my final decision.”

“I assure you, dear fly, not a day shall go by that we all won’t be fully satisfied.”

“Although you seem honest, I’m still not so sure. No one’s ever proposed a joyride.”

“Look around. We’re alone here. And *VRROOOM * Did you hear that?
They’re about to leave for the stars.
Wouldn’t it be a shame to leave this earthly plane without an adventure
to write in our memoirs?”

While the fly mulled it over, and humans pre-checked
potential problems that in flight might arise,

The spider practiced patience, a great deal of patience, while spinning his next web of lies.

Once the fly acquiesced, spider pointed his guest in the direction of a dark quiet corner.
“Since you can’t buckle in, for your safety I’ll spin you a seatbelt of soft gossamer.”

Four days later, setting down near a crater after hours of jolts, bumps, and jerks 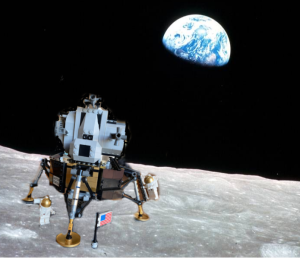 There came a great scuffle, a shuffle, a tumble,
a rumble, a gurgle, a 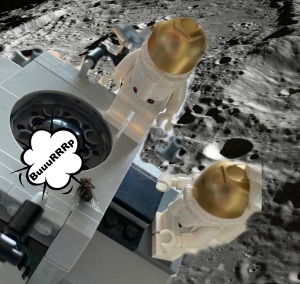 And now my dear friends, since we’ve come to the end, my wish for you is simple.
Live Long And Prosper, Stay Safe and Be Well.
Now tell me, have you a better rhyme word than pimple?

❤ Thank you for stopping by today ❤

(and for putting up sometimes with my forced rhymes)

Based on  THE SPIDER AND THE FLY by Mary Howitt and
Inspired by my husband’s #ShelterInPlace Day 57 Lego project
and Mrs. Fly, dead on the windowsill. RIP.

12 Responses to LEGO LOCKDOWN – THE STOWAWAYS