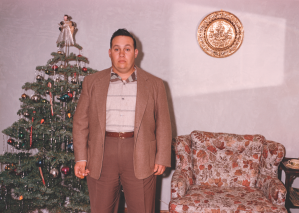 Until I was six, I thought Uncle Sally’s name was Who-Gives-A-Sh*t. Everyone called him that – the neighbors, the few friends he had, his business associates, the family – even  his mother, my Nana. She’d hoped the label wouldda’ forced her caro Salvatore to change his lackadaisical attitude towards everything.

But it never did.

I think having a nickname like that weighed on Nana’s dear Salvatore, more than the truck load of 50 pound sacks of flour he lugged on his shoulders six days a week delivering to all the bakeries in the county. Yes. I said ALL. Still, it’s no excuse for his disrespect. Some say it was in his DNA since”Who-Gives-A-Sh*t!” was Uncle Sally’s answer to everything since he was a kid.

When he was eight and Father Mulrooney told him he’d burn in hell for spitting in the baptismal font, Uncle Sally screamed “Who-Gives-A-Sh*t!” so loud, he made the bells in the belfry tinkle.

When Sister Rose-Michael sent him to Mother Superior’s office for hocking the spit ball at Vinnie D’Angelo that made him trip over Carmella’s desk and split his head open on the bookshelf deep enough to spray blood all over CHARLOTTE’S WEB making it a book no one wanted to ever touch again and wide enough that he needed ten stitches, Uncle Sally grumbled, “Who-Gives-A-Sh*t!” Three times in a row! That got him one whole week of afternoons on his knees in the front of the classroom, not that he cared.

You wouldn’t know it from looking at him, but besides his deer-in-the-headlights stare and nonchalant attitude, Uncle Sally had a terrible temper. When his customers complained that he was late with their semolina (which happened at least once a week, usually on Saturdays), so late there was no time to bake baguettes for the morning rush, he’d dump the sack on their feet and kick it until it split open, all the while shouting, “Who-Gives-A-Sh*t!” over, and over again.

It always puzzled me that those businesses put up with his indifference and disrespect. Why didn’t they just change distributors?

But Uncle Alfonso was a bully, so no one gave a sh*t anyway, least of all, Uncle Sally.

#95 is in answer to the Writer’s Digest’s prompt for the week ending January 7, 2019. I never did get to finish it on time for submission with the holidays and all, but Uncle Sally would not get out of my head until it was done, which is the subject for next week – the reasons Why I Write. Until then…

I am an adventure seeking ponderer of the mysteries of the universe, writer of children's books (represented by Stephen Fraser of the Jennifer DeChiara Literary Agency), and lover of anything involving armor, archery, or swashbuckling.
View all posts by Donna Gwinnell Lambo-Weidner →
This entry was posted in ADVENTURES, Essay, HUMOR, SHORT STORIES, TRAVEL/PHOTO Themes, VIGNETTE, WRITING CHALLENGES and tagged adventure, D.G.Lambo, Donna Gwinnell Lambo-Weidner, vignette, Writer's Digest Challenge #95. Bookmark the permalink.