KALAALLIT NUNAAT – Through The Eyes Of A Potato

How long does it take for a potato to freeze? I wondered as the rotors whirred to life. It was April in the Arctic. We were on the last leg of our journey to spending eight days in a remote village in East Greenland. Four days in a guest house and four in the wild on dogsled.

How long would it take an eyeball to freeze in its socket? was really the burning question that churned in my stomach before the helicopter taxied, lifted, and lunged toward our destination with the first half of our group on board.

I had a while to ponder my adventur- ous nature in the comfort of the Nerlerit Inaat Airport until it finished loading, departed, and looped back around to collect me, my three remaining fellow travelers, our gear, and a few sacks of spuds that had already accompanied us on the two-hour flight from Akureyri, Iceland – but instead, I zipped up my three layers of clothing, clomped from the toasty waiting room into the bracing afternoon breeze, and trudged across the frozen tarmac.

My mission? Distraction. And counting the number of eyes on one potato would do nicely.

There were eleven. Not counting the naval where it had been attached to the tip of its mother’s long, hairy roots as it safely slumbered under a rich, warm blanket of earth.

But the diversion did serve a purpose. That one plump pocket of starch spoke to me (not out loud, of course). “No amount of worrying can change the future,” it said. “Try viewing the world from my perspective. Be me. Be the potato. Untethered. Unconditional. Embracing new experiences. Eyes open.”

By the time we reached our destination 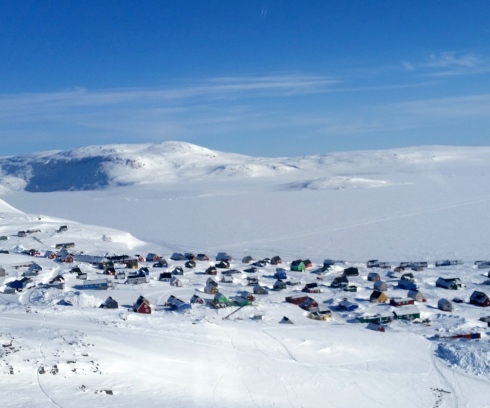 I had accepted the tuber’s challenge and set my awareness dial to ON.

compares with where the residents of Ittoqqortoormiit do most of their shopping.

Unlike the tractor trailers that keep the shelves at my grocer’s well stocked every day of the week, a supply ship drops anchor in East Greenland’s Scoresby Sund only twice a year, both times in August. They provide the village’s general store with things you don’t find in the wild, like oranges and onions, paint and pyjamas, boots and bullets, toilet paper and tacks, cookies and cables, and frozen meat farmed in Denmark – all at a much higher cost than I would pay at home.

For their survival, folks in Ittoqqortoormiit rely on fishing and hunting. Seal, narwhal, muskox, hare, and polar bear are the mainstay of their diet. 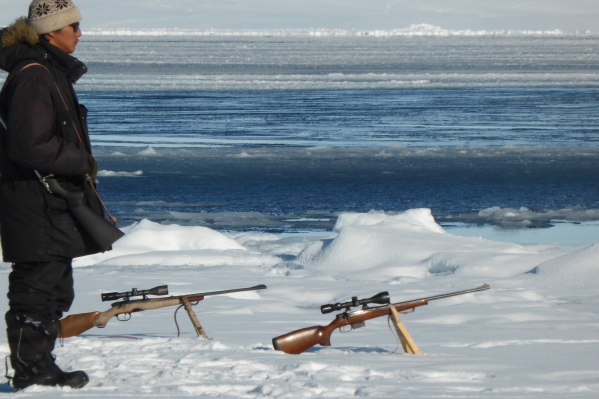 “Here, hunting is not about a trophy for the wall or about enjoying a good day out with the boys. It is for putting food on the table and the animal’s skin is still used for clothing and kamiit. The parts that are not eaten are used to feed the dogs. Thus all parts of the animals are used to provide for the hunter, his family, and his dogs.”

For each municipality there is a quota. Our second day on the sleds brought news that Ittoqqortoormiit had in fact, almost reached their bear limit when our lead hunter stood up on his sled mid-mush, half turned, and held up one finger to our short caravan.

By the time we reached Ittaajimmiut, the abandoned settlement where we’d overnight in a cabin instead of tents due to the increased polar bear sightings in the area, the quota was two closer to being met for the season. The two polar bears that had been hunted that afternoon would provide enough meat to feed one person three meals a day for seven months. That’s 630 meals. Sounds like a lot, but it only equates to less than one-and-a-half meals per inhabitant for one day since the village houses a mere 450 people.

It should also be noted that samples from various parts of the animal are taken to be used in ongoing studies on the effect of contaminants on the species. A study that ran from 1999-2011 already determined that “East Greenland polar bears are among the most polluted species, not just in the Arctic but globally.”

On this particular day, an esteemed elder who’s been hunting for sixty years points out bits of undigested seal fur in one bear’s stomach – proof enough for him that the changes in our climate is affecting the bear’s ability to find enough food to eat. 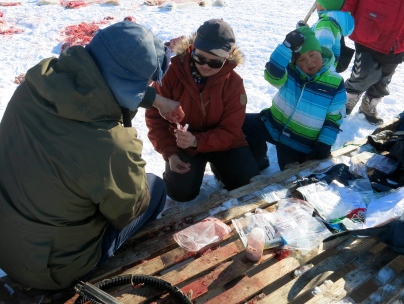 Once the dogs were fed, water hauled and set to cook,

we too were honoured with a taste of the day’s hunt, but only once the meat had been boiled first since polar bear meat contains strychnine and should never be eaten raw. A recent group of French tourists did not heed the hunter’s advice and after frying up a few rare steaks were sick for weeks and almost died.

As for me, I find it to be a little too fishy for my taste.

As for the potato in me, after a luscious dinner of muskox stew we bundled up, slipped on our boots, trudged outside and marvelled at the end of day spectacle at our doorstep.

A short while later, we took in the night sky, 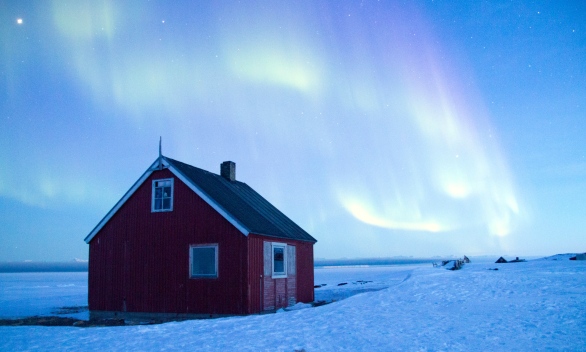 not giving a thought to what tomorrow might bring.

Before turning in for the night,
I thanked the potato for sharing its wisdom with me,
as I do now, to you, for stopping by today…

To catch up on my complete Arctic adventure thus far, press HERE.

I am an adventure seeking ponderer of the mysteries of the universe, writer of children's books (represented by Stephen Fraser of the Jennifer DeChiara Literary Agency), and lover of anything involving armor, archery, or swashbuckling.
View all posts by Donna Gwinnell Lambo-Weidner →
This entry was posted in ADVENTURES, ARCTIC WONDER, HOLIDAYS, ROAD TRIP, TRAVEL/PHOTO Themes and tagged adventure, adventures in Greenland, D.G.Lambo, dog sledding Greenland, Donna Gwinnell Lambo-Weidner, hunting, hunting for survival, Ittoqqortoormiit, polar bear, Scorsby Sund. Bookmark the permalink.

19 Responses to KALAALLIT NUNAAT – Through The Eyes Of A Potato