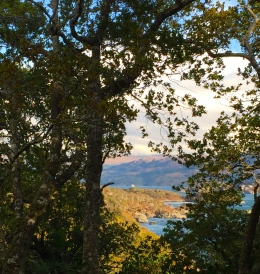 Once the morning sun broke through the clouds, the grey mist pulled back from Glenborrodale’s ragged shoreline’s nooks and crannies. It rose from the loch like a gossamer shade tugged from the edge of a wooded windowsill revealing a beauty distinct to the Scottish Highlands.

The atmosphere immediately hugs you in a warm tartan of peace and tranquility, lore and legend. It begs you to use words like fancy, toadstool, and porridge.

With a fortnight to go until Halloween and given the lore that seems to seep from every moss tufted stone and stump tucked in the shaded hollows found ’round every bend in the road, I suppose I shouldn’t have been surprised when a colorful crowd of wee local folk showed up at my cottage door this afternoon. The seven, varied as much in shapes as in sizes – from round as a macintosh’s button to wiry as a walking stick – and not a one of them were dressed in a hint of the same color. All the better to hide in the heather on the autumn carpeted hills, I suppose. 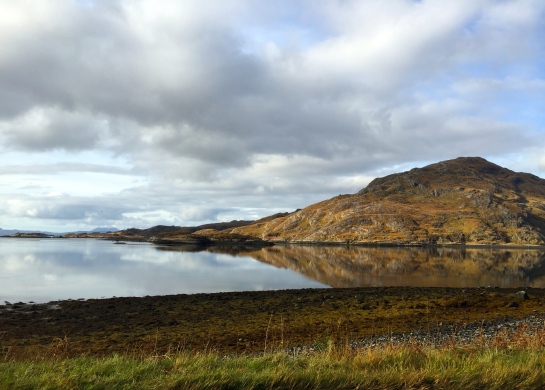 Topping off at a height where he was able to pinch my ankle in order to be noticed, the one who introduced himself as Fergus was the tallest of them all. Once I stepped back and drew a hand to my lips stifling a gasp, the stout, bearded man removed an acorn cap from his bushy head of red hair, bowed, and declared, “I dunno why, but by order of the gran’ elfin laird hisself, fer yer kindly smile on the ferry dock yesterday,

he’d like you to have this bag o’ skulls and lollipops to protect ye shood eny banshees be a wantin’ to disturb ya on this next Samhain.” 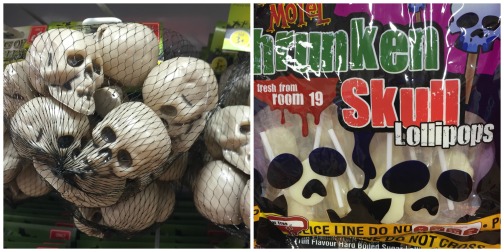 I promptly asked that Fergus relay my thanks to his liege and invited him and his crew inside for a nice cuppa’ tea, but he reneged, claiming the bunch had more stops to make before they settled in for the night. With a wave and a song the group turned and disappeared behind a dried brown fern to the sound of fiddles carried on the wind.

I think I’d fancy a bowl of porridge now to warm my belly before setting out on a stroll around the loch in search of Nessie. The odds are looking good, don’t ya think?

Should I come across any toadstools on the way, I’ll be sure to leave the wee folk a token of my appreciation for their concern over my welfare.

I will be off-line for the next few weeks, so I’ll wish you all a Happy Halloween in advance and a good night from bonnie Scotland.

I am an adventure seeking ponderer of the mysteries of the universe, writer of children's books (represented by Stephen Fraser of the Jennifer DeChiara Literary Agency), and lover of anything involving armor, archery, or swashbuckling.
View all posts by Donna Gwinnell Lambo-Weidner →
This entry was posted in ADVENTURES, HUMOR, ROAD TRIP, TRAVEL/PHOTO Themes and tagged adventure, Donna Gwinnell Lambo-Weidner, elves, Glenborrodale, Halloween, Scotland, travel in the Scottish Highlands. Bookmark the permalink.

11 Responses to A PRE-HALLOWEEN SCOTTISH TALE