Potty talk took on a new meaning for me today when I stopped to wash my hands in the ladies room before lunch. I had just pumped the soap dispenser and turned on the tap when a young voice from inside the stall behind me pierced the silence, “Simon says, ‘Look up!'”

A 10-year-old girl standing at the sink beside me tossed a thick dark braid over the shoulder of her pink tweety-bird t-shirt. “That’s my cousin visiting from America. She loves playing that game, especially when we go to restaurants and everyone at the table is looking down at their phones.”

After a shared laugh and introduction, Meera told me in great detail how Maya had just gotten sick for the fifth time since their arrival in Agra last night. I’ll spare you the colorful details since her story was interrupted when the door flew open and another petite pink clad 10-year-old with a smile like a crescent moon and sparking green eyes rimmed in sky blue flecked with mischief stomped beside her cousin and exclaimed, “Ahhhh – that feels so much better. Now I’m ready to go see the Taj!”

“You’d better rinse your mouth and wash your hands first,” I said, nodding at the sink. Then I thanked the delightful pair for their sage advice and left them chattering and giggling in a hazy pink huddle.

The Taj is what the locals lovingly call the Taj Mahal. Seventeen thousand people a day visit the white marble mausoleum built by Mughal Emperor Shah Jahan over three hundred years ago as an expression of his deep love for his third wife, Mumtaz Mahal, “the chosen one of the palace.”

The first thing I do once we clear security and walk through the gate into the outer courtyard of the complex is look up. After a smile, a nod, and a chuckle, Mr. Man

which opens to perhaps the most phenomenal architectural wonder in the world. 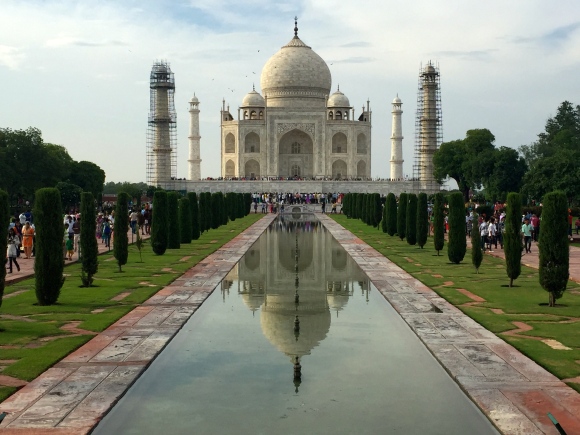 Once we marvel at the sight from afar, we meander closer

Like colorful jewels strung on an exquisite necklace, the band of visitors coils round

and round to the second level.
Along the way, stunned faces turn skyward to savor the delicately carved designs adorning the tomb’s massive walls and arches. 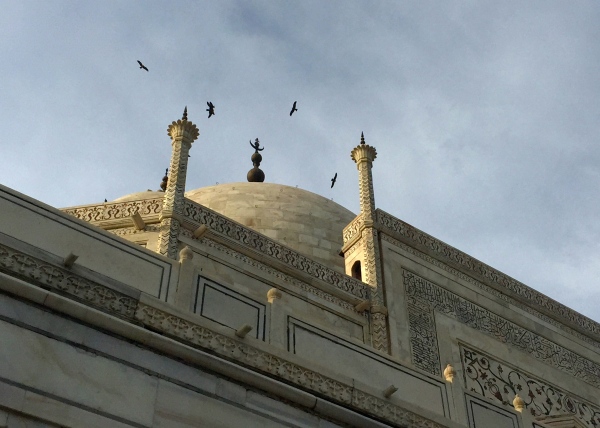 Once inside, there is understandably no photography allowed. Instead, snippets of conversation circulate through the sticky air of how Shah Jahan’s beloved wife died soon after the birth of their fourteenth child in nineteen years and that, after a year of secluded mourning, Shah Jahan’s hair, including his manicured moustache, pointed beard, and trim eyebrows, turned white as the moon on a cloudless night from grief.

As if this isn’t heartbreaking enough, we find out later that Shah Jahan’s third son then killed his two older brothers, declared his father incompetent, and took over as maharaja. Once he’d imprisoned Shah Jahan in a room in the Red Fort on the opposite side of the Yamuna river, the deposed emperor was left to gaze only on a reflection of the tomb of his beloved in a mirror until he was finally able join his wife inside the Taj eight years later.

A sad story for sure, yet a remarkable attest of one’s love for another. 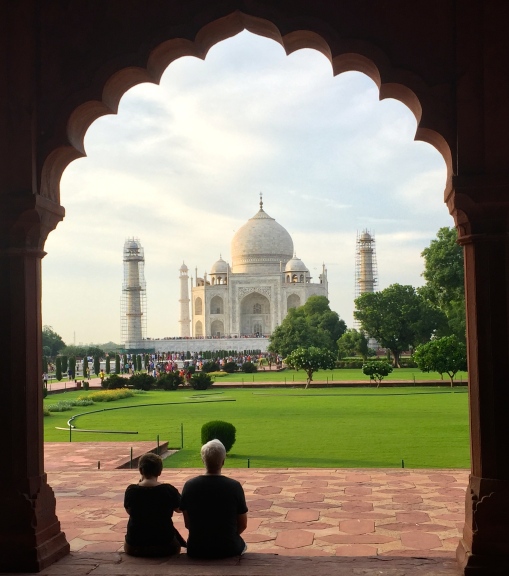 After a time of contemplation,
the sun gradually loses her heat and evening gently pecks her cheek,

I look up at my own true love
and thank him for treating me to a most magnificent day.

I am an adventure seeking ponderer of the mysteries of the universe, writer of children's books (represented by Stephen Fraser of the Jennifer DeChiara Literary Agency), and lover of anything involving armor, archery, or swashbuckling.
View all posts by Donna Gwinnell Lambo-Weidner →
This entry was posted in ADVENTURES, FAMILY, ROAD TRIP, TRAVEL/PHOTO Themes and tagged #DiscoverWP, adventure, Donna Gwinnell Lambo-Weidner, dp_photo_challenge/photo-challenges/details/, Taj Mahal, traveling in India. Bookmark the permalink.