It’s been over a week since shrill sirens screamed their way around the back end of the peninsula. Did you hear them too? Or were you already gone – spirited away on a breath of wind?

I’m baffled at how, ten days later, I still think of you on a daily basis. It’s not like we’re family. We’ve never met. Not in person, anyway. Yet, you constantly stalk my days and cloud my nights – memories – a whirling cyclone of family, friends, and fans welcoming you into their hearts. Your humor and generosity have affected more lives than you could ever have imagined. I can’t get you out of my head. It probably doesn’t help that I see your rooftop twice a day from the hill where I walk the dogs. Until August 11th, I didn’t know where you lived. Well, except for the house in the city. Everyone knows the Pink Palace.

By the way, was that you yesterday, riding the fog over Mount Tam

and coming to rest in the wild flowers that have mysteriously bloomed overnight
on the hilltop overlooking your home? 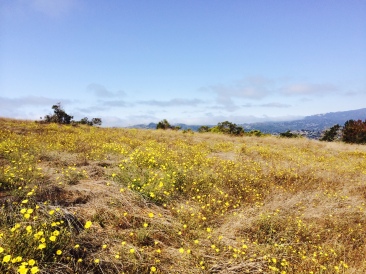 Who else would it have been?
I like to think of them as having sprouted from tears born of laughter
and not those shed from any pain we might have shared
over countless buckets of  hot buttered popcorn.

To the Clouds, Dear Robin!
May you Rest In Peace.
Until the next time around…

(c) What Dreams May Come

I am an adventure seeking ponderer of the mysteries of the universe, writer of children's books (represented by Stephen Fraser of the Jennifer DeChiara Literary Agency), and lover of anything involving armor, archery, or swashbuckling.
View all posts by Donna Gwinnell Lambo-Weidner →
This entry was posted in ADVENTURES, AWESOME PEOPLE and tagged adventure, Donna Weidner, Mount Tamalpais, shazbot, tribute to Robin Williams, What Dreams May Come. Bookmark the permalink.