Tender Is The Knight

Alice Wetherby-Pimms was at it again. Although she claimed to have done her best to rein in the part of her responsible for her unkind actions on numerous occasions, the child was simply unable to contain the spiteful goblin living within her small, plump frame.

If you ask anyone in the village, they’ll not tell you otherwise, as her most recent villainous act was witnessed by the family’s faithful groundskeeper whose gentle son had borne the brunt of the girl’s anger the day the boy lifted his gaze from the flagstone floor in her presence. It was only to return the lace trimmed hankie that had slipped from her pocket in the rose garden. He’d charged into the house after the girl and didn’t want to plow into her. He needed to see where he was going.

Even though he promised with all his heart to never repeat his faux-pas, Alice’s face  pinched. She clenched her fists and stomped her feet, setting off the

perfect storm that lifted the boy off his feet, spun him into a whirling tornado, and funneled him into the nearest empty vessel.

To everyone’s horror, but most especially the lad’s father, the outfit was much too small for the boy’s substantial girth and stature. It was a wonder he fit through the hole in the iron helm’s pocked and battered visor at all.

To this day the lad stands imprisoned within a suit of armour in the mansion’s vestibule. If you listen carefully, you can hear the boy knocking his remorse in morse code from behind the breastplate.

As for the groundskeeper? He too was unable to escape the situation unscathed. But being an optimistic soul, he is happy with having a bird’s eye view of his son from the rafters . 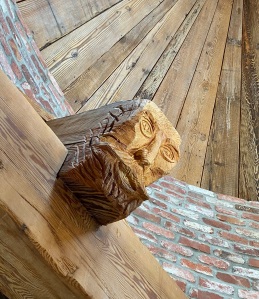 Will Alice ever be held accountable for her dreadful deeds?
Maybe next time.
For now, thank you for stopping by.
❤ Be well ❤

The Truth About Alice

Minding My P’s and Q’s – A Punctilious Quest

A Most Dubious Collection

The Case of the Purloined Pickle

Did Someone Say Chocolate?

I am an adventure seeking ponderer of the mysteries of the universe, writer of children's books (represented by Stephen Fraser of the Jennifer DeChiara Literary Agency), and lover of anything involving armor, archery, or swashbuckling.
View all posts by Donna Gwinnell Lambo-Weidner →
This entry was posted in ADVENTURES, HUMOR, VIGNETTE and tagged Adventures of Alice Wetherby Pimms, armor, Donna Lambo-Weidner, Donna Weidner. Bookmark the permalink.

6 Responses to Tender Is The Knight