‘TIS THE NIGHT OF WINTER SOLSTICE 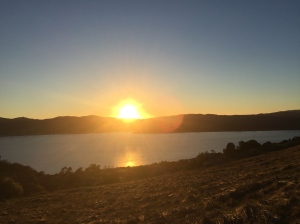 ‘Tis three nights before Christmas,
the day after Hanukkah,
eight from St. Lucia,
and five ’til Kwanzaa.
‘Tis two months since Diwali,
India’s festival of light,
as Sun settles into
our world’s longest night.

A breeze hugs the mountain, nudging daytime to eve,
while an unkindness of ravens and a hawk take their leave.
Observing them soar to where they’d come from
I notice how still it’s suddenly become. 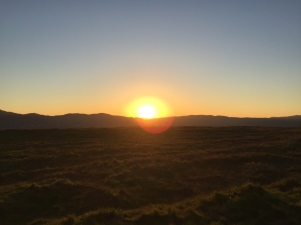 Gone is the hum from the roadways below.
‘Tis as if all’s been muted
by a blanket of snow.
Neither barks nor peals of laughter
rise up from the quay,
Not one crack of a gun
from warring worlds far away.
Hungry bellies have stopped rumbling,
as have wails of misery –

‘Tis the eve of winter solstice
heralding rebirth and reverie.

I pull the silence close.
Hug it.
Wrap it tight.
I savour its benevolence
while stars wink
their
long extinct
light.

Until
Slowly,
Steadily
Serenity settles
into my being.
‘Tis a calm I’ve never felt before
except for once –
when I was dreaming
Of a world where peace and compassion rule,
one where every child can attend school.
A world where hunger is a defunct word,
and generosity, not greediness, is the choice preferred.
‘Tis a world we may create this very day
if “we use our knowledge wisely,” as the old ones say,
“by treading lightly upon the earth
“and walking in a good way.”

And so my Dear Friends, before I, too, take flight

HAPPY HOLIDAYS
to all

And to all a good night !

I am an adventure seeking ponderer of the mysteries of the universe, writer of children's books (represented by Stephen Fraser of the Jennifer DeChiara Literary Agency), and lover of anything involving armor, archery, or swashbuckling.
View all posts by Donna Gwinnell Lambo-Weidner →
This entry was posted in ADVENTURES, ANCIENT WISDOM and TEACHINGS, HOLIDAYS, POEMS and tagged 'tis poem, adventure, D. G. Lambo, Donna Gwinnell Lambo-Weidner, Holiday Greetings 2017, poem, winter solstice. Bookmark the permalink.

21 Responses to ‘TIS THE NIGHT OF WINTER SOLSTICE