Nature will do it every time – fill me with a sense of awe that is jaw-dropping. And she did not disappoint as our helicopter rushed over the spare landscape toward Ittoqqortoormiit. In summer, the remote village in East Greenland hugs the rocky shore of Scoresbysund like a colorful belt cinched along the edge of the sea. The remainder of the year she rests like a jeweled crown on the headland of a frozen fjord like she did on this day in April, just six weeks ago. 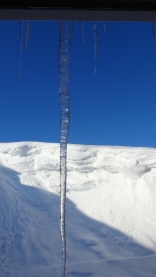 At the end of my last post, I planned to continue our dog sled adventure beginning with an exploration of the village, but there is one of many first impressions that I forgot to mention.

Besides the marked contrast of crisp white against vivid blue, the freshness of an unsullied wind, and the inquisitive little ones that greeted us and took such joy in trying out their english on our small group, it was the sound of silence that struck me most. Not in a Simon and Garfunkel sort of way, but a living under a giant pair of invisible noise cancelling headphones way…

A wine connoisseur might describe it as crisp, yet soothing, with undertones of quietude. I’d say it hugs the laughter of children snowboarding just beyond the helipad and numbs the thwump-thwump of the helicopter beating its retreat to Nerlerit Inaat. It sharpens the sled dogs’ barks of excitement at striking out on the hunt

and intensifies the whine of the snowmobile that hauls us to where we’ll be spending the next two nights before we set out on the trip of a lifetime. 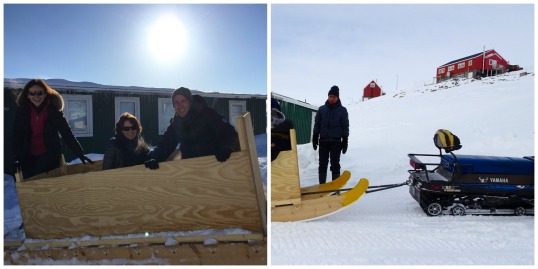 Once we are settled into our rooms and warned to never leave the village without a rifle, it’s time to explore. But just in case, Damian is prepared *

The beauty surrounding us is beyond description – the stillness, well …

with the exception of a few ravens nattering “nevermore” from their perch on the water tower, there is no birdsong. The chatter, hum, and blasting sounds of home are replaced by the crunch of snow underfoot and a sense of calm. It has a palpable effect on the passing of time, too. Or at least how one perceives the ticking of the clock.

Here, on the top of the world, you never know if you’ll be kept from an appointment by a roiling storm, sidetracked by the sudden siting of a polar bear family, or waylaid with warm hugs from an unexpected visit from an uncle you bump into in the shop, where, holy sh-nike, one single pound of potatoes costs 3 DOLLARS! Well, heli-fuel is not cheap. Then there’s $2 for one egg, $20 for a cabbage, and $6 for a head of lettuce, if it’s in stock. (Hmmm. Could this mean hunting is a necessity and not a sport?) 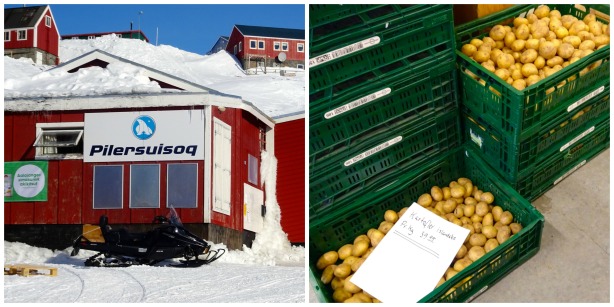 There isn’t much traffic in Ittoqqortoormiit

so there is no need for crossing guards 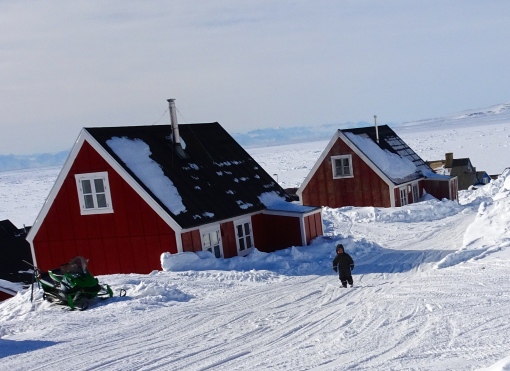 only an occasional reminder for the tourists to be observant…

The Piareersarfik Saanavik Art Shop certainly has a stunning view

and the young artists and their creations are equally stunning

Before long, the sun winks at us from behind the fjord,

dusk blankets the hill behind our house,

yet a different sound of silence.

If I were in West Greenland I’d say Sinilluarit,
but since I’m not and my East Greenlandic is lacking,
sleep well will do for now.

* with respect to my comment about Damian’s preparedness in this photo – I do not, nor did anyone in my group, ever take the dangers of living in the arctic lightly. A Canadian transplant living in Ittoqqortoormiit for many years told us, “We don’t worry about pickpockets, muggers, or terrorists here, BUT the first thing we think of when we see an animal is, ‘Can I eat it? Will it hurt me? ALL animals are wild.'”

With this in mind, it is with great humility and deep respect that I say Qujanarsuaq to the hunters that kept us safe on our travels ❤

For previous posts leading up to this day see:
THE CALLING
AMUSE-BOUCHE
ICELANDIC ANTIPASTI
KALAALLIT NUNAAT – a dream realized