STONES FROM THE RECTUM—A Tail of Adventure

“No. We already have a dog. One is enough,” I said. Once, twice, a quadrillion times.

It wasn’t even the kids asking anymore. It was Ronald, my hubby dearest. I thought of suggesting he go get himself a fish if he needed a new pet, but then I knew I would be the one crying and humming “Amazing Grace” when it came time to flush it down the toilet upon its final journey to The-Great-Ocean-In-The-Sky. For at least an entire year, I managed to stay true to my convictions, maintaining that “Jazzie and I don’t need company.”

Yet, here I sit, almost three years later with Lucy lying across my feet, snoring like a two hundred pound truck driver with sleep apnea. Not a surprise, really. Succumbing to constant nagging discussions on the subject is how Jazzie had soared into our lives over thirteen years ago—also on the wings of multiple fingers crossing hearts— all promising to pitch in and feed, walk, play and bathe her. For the most part, it worked, unless of course she’d taken a fine roll on some dead rodent, in wild animal poop (deer being her favorite), or out upon the field after a local farmer had just fertilized it with fresh dung—pig, cow, or a mixture of the two (no preference here)—then bath time was my responsibility. Oh, but I digress—

We bought Lucy for my daughter. Well, that was the excuse at the time.
And, you can see now, why I caved.

She came to live with Elyse in San Francisco after I had an extremely weak moment at a pet store during a visit to the States.

Lucy turned out to be a quirky little puppy. This became clearly evident with her choices in places to sit, thereby earning her the name Lucy Goosey:

Just hangin’ in the laundry room

But then, even after The Goose had grown some, and came to live with us in Germany when Elyse had a very busy semester, she continued to find odd places to sit, like— 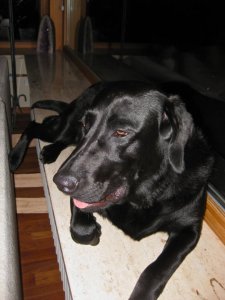 On the window sill…

On the patio table.

BUT, the most unusual place we ever found her sleeping was here:

Now, when Lucy’s not barking at flies on the wall, or at me to take her out for a walk, which I’m not complaining about, because then, in addition to getting any much needed exercise, I’m also exposed to the beauty of our new California surroundings—

A walk up the street, to the top of the hill…

And toward home again…

Fantastic, right? Ah yes, well—as I was saying, when The Goose is not 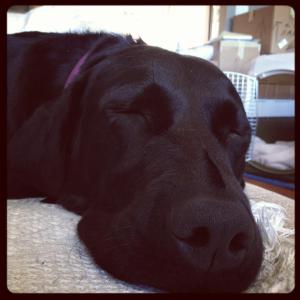 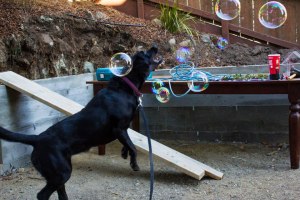 WALKING WITH HER FRIENDS AND TRAINER, SIR-WALKS-A-LOT

…OR CHARGING THROUGH PUDDLES…

Then she’s doing other goofy things, like eating rocks:

And now—the segue complete—to Lucy Goosey’s adventure one chill and blustery day—twenty-four hours spent at the Tamalpais Pet Hospital, which resulted in the removal of: 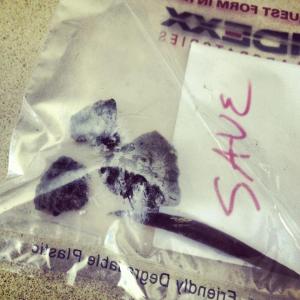 One laparoscopically removed, two shot from their intestinal constraints on the waves of an enema—diamonds in the  rough.

I still wonder sometimes—had they been given more time to submit to the pressure of Lucy’s devilish and intense innards,

Would those rocks have turned into glistening precious stones?

Then at least I could have used them to pay the Vet bill!

What crazy things have your pets done lately?

I am an adventure seeking ponderer of the mysteries of the universe, writer of children's books (represented by Stephen Fraser of the Jennifer DeChiara Literary Agency), and lover of anything involving armor, archery, or swashbuckling.
View all posts by Donna Gwinnell Lambo-Weidner →
This entry was posted in ADVENTURES, HUMOR, LUCY and JAZZIE and tagged adventure, blog, California, diamonds, dog, Donna Weidner, gemstones, Germany, Labrador Retriever, Lucy, pets, rocks, San Francisco, writer. Bookmark the permalink.

16 Responses to STONES FROM THE RECTUM—A Tail of Adventure